Moving the blog to Elixir and Phoenix LiveView

I moved my blog. It’s now powered by Phoenix LiveView. Let me tell you about the transition. I outline the features I lost, I gained, and some performance surprises along the way.

What I’m giving up:

What I’m not losing:

The “giving up” list doesn’t bother me too much, at least not on my blog. If you’re managing a huge static site with lots of pages; perhaps look elsewhere at the moment. The biggest reason is that Elixir lacks an asset-pipeline to optimize images. It wouldn’t be impossible to have with a LiveView-powered blog with optimized images, but as far as I know, you’ll have to roll-your-own.

I was initially worried that moving a static site to an Elixir-powered web application would have too many trade-offs, but I was wrong! Many static sites today don’t offer pre-compiled syntax highlighting, but I was using one, so it’s a loss for me. Losing the PWA and cached offline access don’t bother me.

The “gaining” list is worth it to me, as an Elixir developer, because it unlocks some potential for what I want to do. I’m considering collecting LiveView-powered components, and how else would I be able to show them off without a LiveView site? So, the trade-off is totally worth it to me.

The “not losing” list was surprising. Let’s talk about it; I’ll show you some informal benchmarks.

Let’s look at the dev server

Elixir and Phoenix offer live-reloading when assets change (ie, JavaScript and CSS), and code-reloading when Elixir code changes. To make this reloading work in the context of a blog written with Markdown, I used NimblePublisher. NimblePublisher is a small system that sets up compiling Markdown files into HTML at compile-time. Create a /blog folder, put your markdown in there, and configure Elixir to watch it for changes.

Now, a big plus for Elixir is the boot-up time. Granted if you haven’t changed files that requires the entire Elixir project to re-compile, booting up the dev server is very quick. How quick? 36 times quicker. But before you run off to social media with this stat, just remember that it’s not very scientific, nor is it always fair. It’s not apples-to-apples.

Let’s say that I have inspiration one day and I want to write a blog post. I go to my blog folder, start the dev server, and start writing. I haven’t changed anything; I just want to write a post. 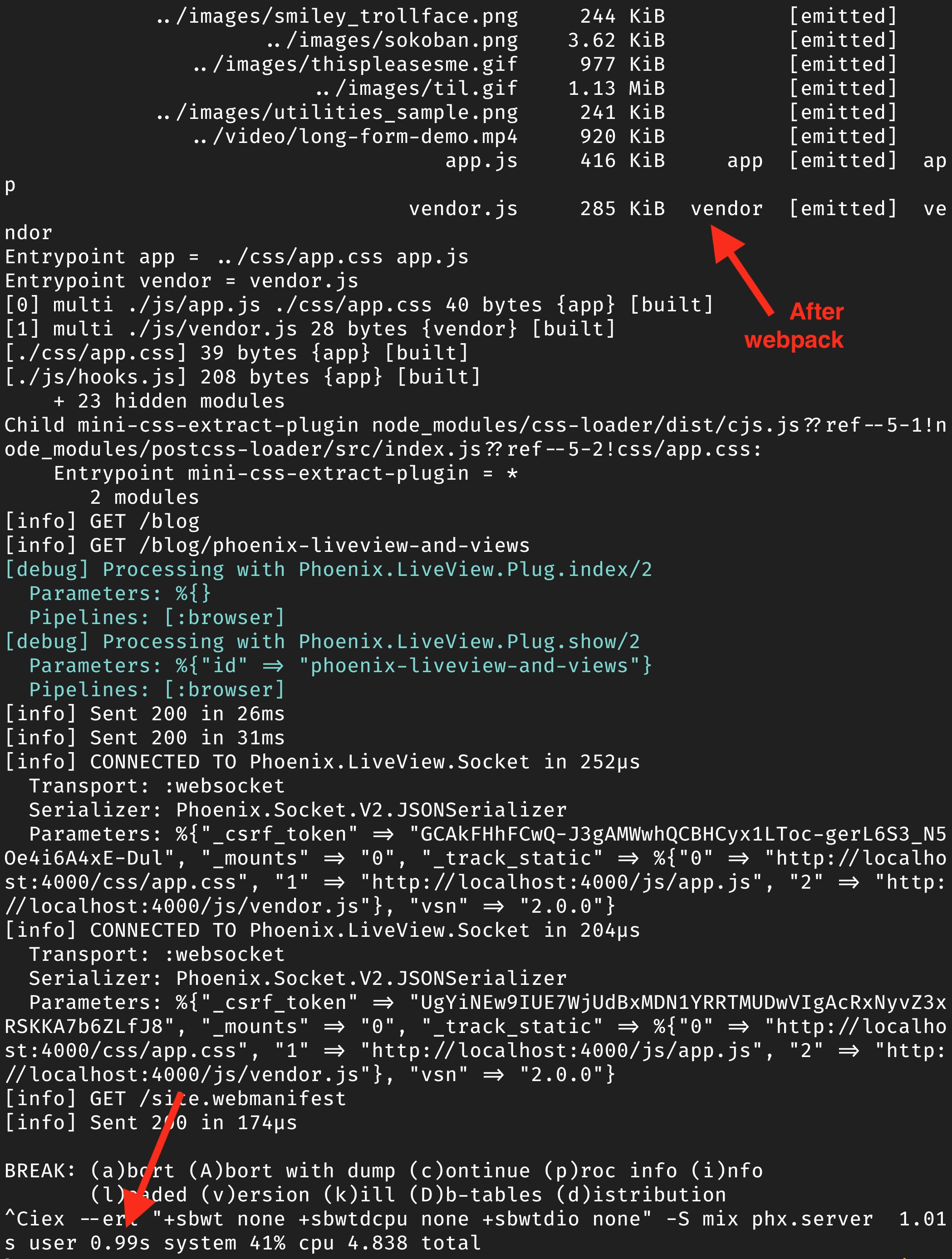 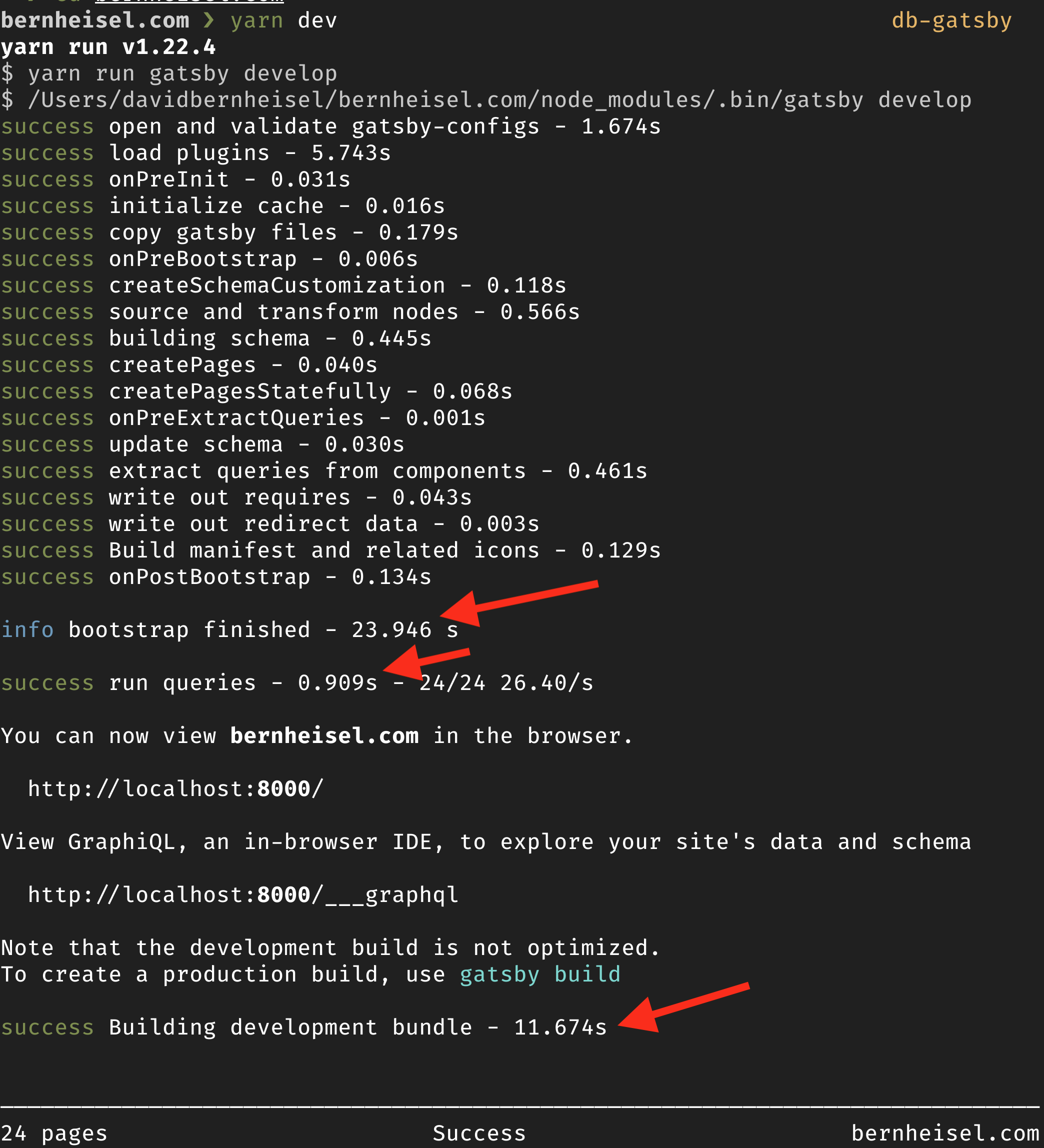 If I’m reading this correctly, Gatsby took about 36 seconds to boot. I hadn’t changed anything in the project! In comparison, Elixir and Phoenix booted in 1 second, and that includes Webpack; granted, nothing changed in the project and some of this is thanks to HardSourceWebpackPlugin; but even without that plugin, Elixir is still up and running and serving requests and whenever Webpack finishes it will live-reload with those compiled CSS and JS resources.

Again, I’ll repeat, this is not apples-to-apples. For example, I’m giving up compile-time syntax highlighting for non-Elixir code blocks. Gatsby is likely recompiling everything without needing to, whereas Elixir is a compiled language that only recompiles what it needs to.

NimblePublisher also handles syntax-highlighting at compile-time, but unfortunately only when the language is Elixir or Erlang. Since I write about other languages, including Ruby, JavaScript, Bash, Vim, and more, I need more syntax highlighting options. NimblePublisher is using Makeup for highlighting; so perhaps I can contribute by making more Makeup lexers.

To cover the gap in the meantime, I’m going to syntax-highlight at runtime; in other words, you visiting this page ran some JavaScript to highlight syntax for me! Since this blog is now powered with LiveView, I handled it in a hook.

Let’s see how it works

Cool. That’s not terrible, but still I would much-prefer ALL syntax highlighting happen at compile-time. It’s not like this stuff changes in runtime so there’s no reason for every visitor’s browser to do syntax highlighting for me. Kudos to the Gatsby tool-chain for solving this problem via gatsby-remark-vscode.

There’s no practical difference in my opinion, which is an upset to common perception of JavaScript-powered static sites being much slimmer and faster. 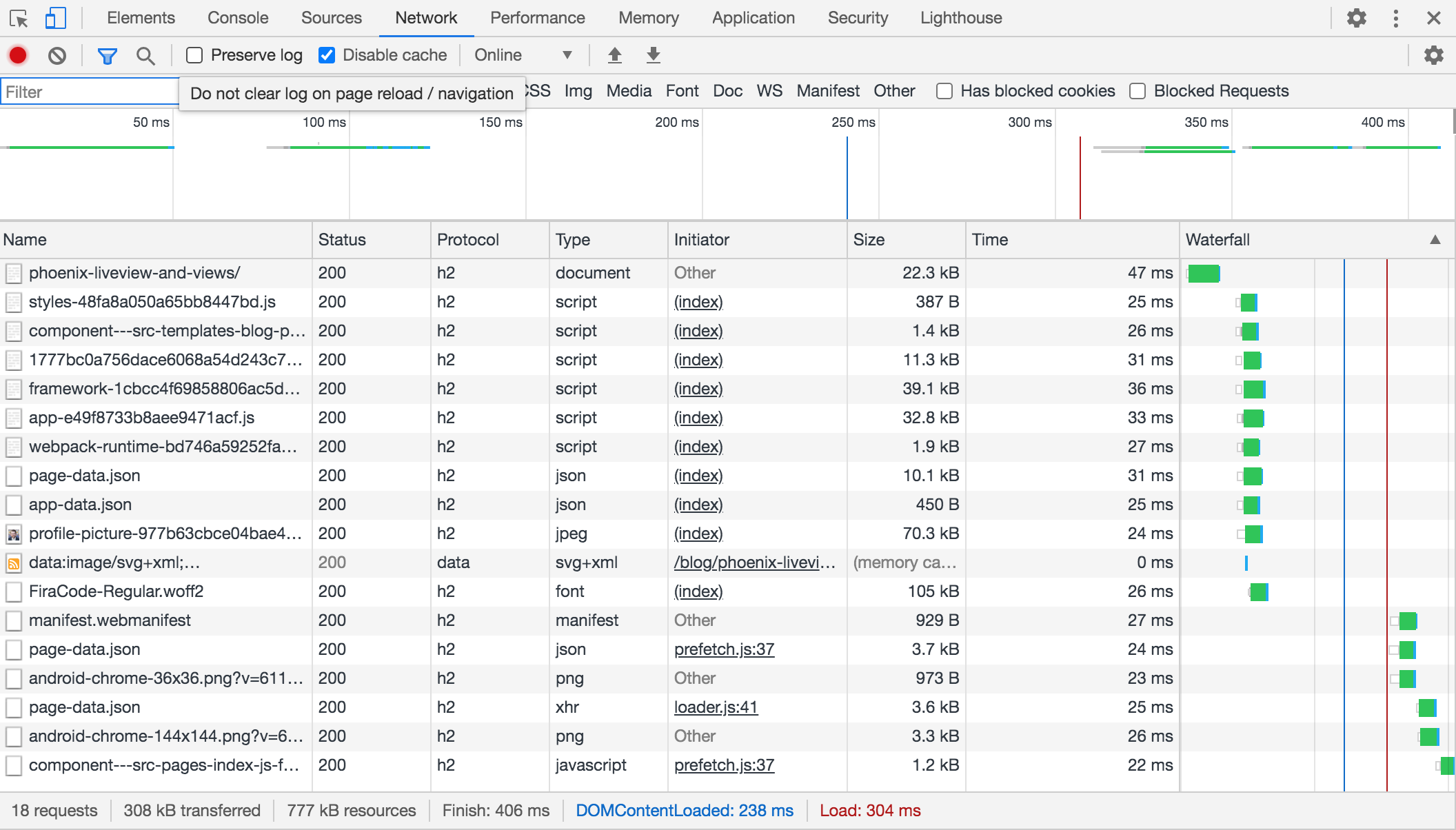 REMEMBER the LiveView-powered blog now requires browser-based syntax highlighing, so there’s an extra 79.5kb of JavaScript that needs to download and parse and run. Also notice that there’s an extra font on the Gatsby site since it needed it on this page.

All-in-all this is very comparable judging by the DomContentLoaded and Load times, but notice that Elixir and Phoenix are barely beating Gatsby in this scenario.

Let’s look at the Blog Index page powered by Gatsby: 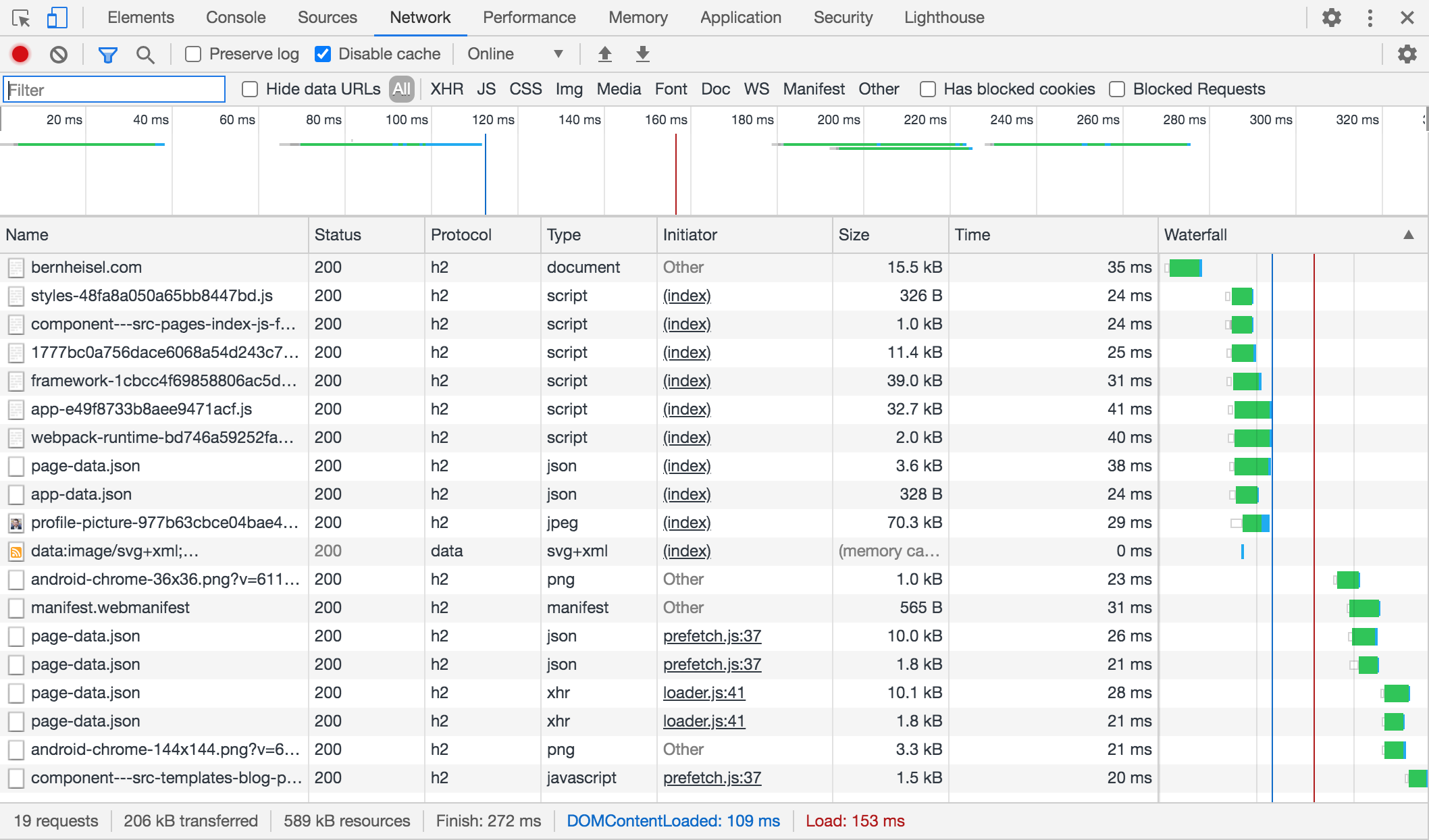 Elixir is slower in this case for DOMContentLoaded and Load times by tens of milliseconds. Hopefully imperceptible to most visitors. Also, that’s not bad considering this is running on a $5/mo server in the US East Coast, opposed to CDN-cached static content at the edge by Cloudflare and GitHub Pages. Also considering that LiveView-powered index page is literally loading every single post it their entirety, but not rendering the bodies of the posts; so there is room for optimization here.

Lastly, just for the giggles, here’s the Lighthouse scores:

The SEO hit on the Phoenix app is because of a canonical URL not being correct. Once the LiveView blog replaces the Gatsby blog, it’ll be 100 again. Also, the Accessibility score took a hit because of different styling where the contrast isn’t high enough in one spot. Really, the only difference is Gatsby’s score of 95 on performance vs LiveView’s score of 99 on performance, and the lack of PWA on LiveView. I don’t really think these scores mean anything between the two sites; but take it as you will.

Now, of course, if you check the score now, you’ll see it’s different because I’ve since added some web font preloading which kills the score. This only happens on the first load though, thankfully.

Migrating to Phoenix LiveView from Gatsby

Here are the big changes. You’ll find several more details on your own if you consider migrating to NimblePublisher depending on your setup.

For example, the front-matter went from this:

The date moved out of the front-matter and relies only on the filename now on disk. It was a little tedious, but since my blog only has a handful of articles, it wasn’t worth it to script something.

For the most part, the HTML structure of the page is the same as it was on Gatsby. I literally copy-pasted the HTML from my Gatsby React components into the Phoenix templates and modified them to not rely on React.

Getting the navbar links to know what page they were on was another challenge. I’m using AlpineJS on this blog, so I leverage some event dispatching in AlpineJS when clicking on navbar links, which is caught and assigns the active/inactive classes on the links. It’s optimistic UI and shadows the LiveView click events, but it should be fine.

I enjoyed the process. I’m making the right decision for myself to evolve a static-site blog into a web application that also serves static content. If you’re only using it for static content, then it’s probably not the right choice to move to LiveView if all you care about is efficiency.

It turns out that argument for JavaScript-powered static site being much better than server-generated content is simply not true. Elixir-powered static sites could also use some help in the areas of syntax highlighting and asset pipelines; so perhaps that’s where I can turn some of my attention to next!

NimblePublisher isn’t the only option out there for Phoenix! You could have a full-fledged Markdown engine in Phoenix that renders the markdown in runtime and interpolates dynamic content during the request. This would solve the issue of asset versioning.

If I got anything wrong or missed something obvious (totally likely) then please tell me! Hit me up on twitter @bernheisel

Check out the source. Lastly, this is hosted on Linode.

What do you think of what I said?

Other articles that may interest you